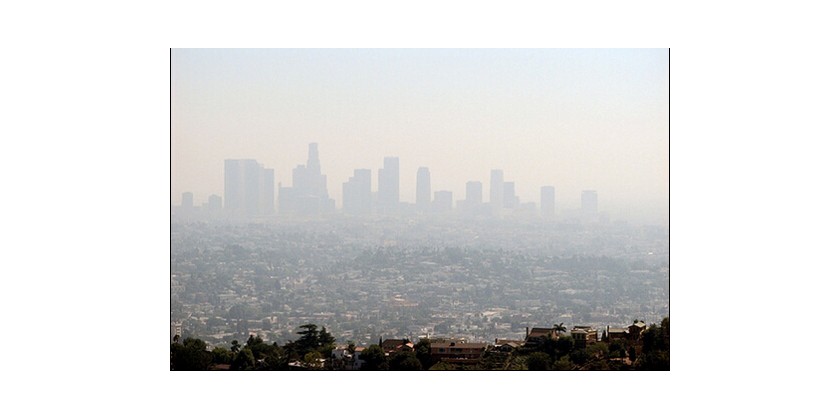 Smog is basically derived from the merging of two words; smoke and fog. Smog is also used to describe the type of fog which has smoke or soot in it. Smog is a yellowish or blackish fog formed mainly by a mixture of pollutants in the atmosphere which consists of fine particles and ground level ozone. Smog which occurs mainly because of air pollution, can also be defined as a mixture of various gases with dust and water vapor. Smog also refers to hazy air that makes breathing difficult.

How Smog is Formed?
The atmospheric pollutants or gases that form smog are released in the air when fuels are burnt. When sunlight and its heat react with these gases and fine particles in the atmosphere, smog is formed. It is purely caused by air pollution. Ground level ozone and fine particles are released in the air due to complex photochemical reactions between volatile organic compounds (VOC), sulphur dioxide (SO2) and nitrogen oxides (NOx). These VOC, SO2 and NOx are called precursors. The main sources of these precursors are pollutants released directly into the air by gasoline and diesel-run vehicles, industrial plants and activities, and heating due to human activities.
Smog is often caused by heavy traffic, high temperatures, sunshine and calm winds. These are few of the factors behind increasing level of air pollution in atmosphere. During the winter months when the wind speeds are low, it helps the smoke and fog to become stagnate at a place forming smog and increasing pollution levels near the ground closer to where people are respiring. It hampers visibility and disturbs the environment.
The time that smog takes to form depends directly on the temperature. Temperature inversions are situations when warm air does not rise instead stays near the ground. During situations of temperature inversions if the wind is calm, smog may get trapped and remain over a place for days.
But it is also true that smog is more severe when it occurs farther away from the sources of release of pollutants. This is because the photo chemical reactions that cause smog take place in the air when the released pollutants from heavy traffic drift due to the wind. Smog can thus affect and prove to be dangerous for suburbs, rural areas as well as urban areas or large cities.

Effects of Smog
Smog is harmful and it is evident from the components that form it and effects that can happen from it. It is harmful to humans, animals, plants and the nature as a whole. Many people deaths were recorded, notably those relating to bronchial diseases. Heavy smog is responsible for decreasing the UV radiation greatly. Thus heavy smog results in a low production of the crucial natural element vitamin D leading to cases of rickets among people.
When a city or town gets covered in smog, the effects are felt immediately. Smog can be responsible for any ailment from minor pains to deadly pulmonary diseases such as lung cancer. Smog is well known for causing irritation in the eye. It may also result in inflammation in the tissues of lungs; giving rise to pain in the chest. Other issues or illnesses such as cold and pneumonia are also related to smog. The human body faces great difficulty in defending itself against the harmful effects of smog.
Minor exposure to smog can lead to greater threats of asthma attacks; people suffering from asthma problems must avoid exposure. Smog also causes pre-mature deaths and affects densely populated areas building it up to dangerous levels. The highly affected people include old people, kids and those with cardiac and respiratory complications as they have easy tendency to be at disadvantage of asthma.

The ground level ozone present in the smog also inhibits plant growth and causes immense damage to crops and forests. Crops, vegetables like soybeans, wheat, tomatoes, peanuts, and cotton are subject to infection when they are exposed to smog. The smog results in mortifying impacts on environment by killing innumerable animal species and green life as these take time to adapt to breathing and surviving in such toxic environments.

Smog is a devastating problem especially due to the fast modernization or industrialization as the hazardous chemicals involved in smog formation are highly reactive is spread around in the atmosphere. Smoke and sulphur dioxide pollution in urban areas is at much lower levels than in the past, as a result of law passed to control emissions and in favor of cleaner emission technology.
So how should you fight with the forceful impact of smog? It can be reduced by implementing modifications in your lifestyle, decreasing the consumption of fuels that are non-renewable and by replacing them with alternate sources of fuel which will reduce toxic emissions from vehicles.